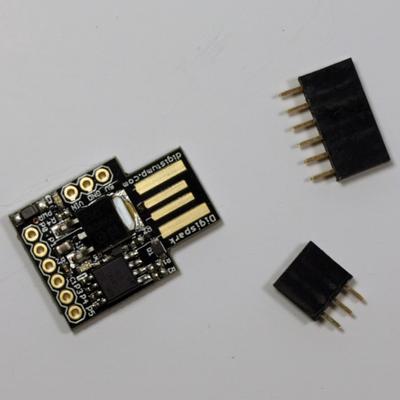 Recently I have been playing with the Digispark development board with the ATtiny85 AVR microcontroller. The cool thing is that it's only 2 by 2 cm big and it plugs right into a USB port.

But when I flashed the canonical blink example to the microcontroller, I noticed that the program didn't blink continuously with the fixed interval I had set up. The first five seconds after plugging in the Digispark the LED blinked in a fast heartbeat pattern (which seems to be normal, this is the bootloader staying in the programming mode for five seconds), then my program slowly blinked for a few seconds, then it was five seconds in heartbeat pattern again, then slower blinks again, and so on. It seemed the microcontroller got stuck in a continuous boot loop.

The Micronucleus project offers firmware files to upgrade older versions, so then upgrading the existing firmware was as easy as:

Then insert the Digispark to write the firmware.

After flashing the blink example, I didn't see the boot loop this time. And the Micronucleus developers apparently got rid of the annoying heartbeat pattern in the newer version.

Only after I received the 5-pack I realized that I had bought a Chinese clone. So it's possible that the original product sold by Digistump doesn't have the issue I'm describing here.