I have been running a home automation system on a Raspberry almost as long as this popular single-board computer family exists. In all those years, the setup has changed a lot: I have replaced the Raspberry Pi 1 by a Raspberry Pi 4, I switched from Domoticz to Home Assistant and more recently to a highly modular setup of home automation services running in Docker containers and communicating by MQTT.

Looking back at my first setup, the seeds were already there for what I now consider the four pillars of a good home automation system:

Let's look into these one by one.

Home automation and IoT devices are notoriously insecure. At the Usenix Security Conference 2019, the Czech security software company Avast and Stanford University presented their research of household IoT devices. Avast scanned 83 million IoT devices in 16 million homes around the world of people who agreed to share these data. The results of the study published in "All Things Considered: An Analysis of IoT Devices on Home Networks" were staggering:

This is not an isolated study. Not a week goes by without some news items about insecure devices, most of the time because basic security measures such as strong passwords are not enforced by the manufacturer or basic programming errors have been made. To give you an idea about what can happen: in 2018 nude videos of the Dutch women's handball team appeared on a popular porn website because the surveillance cameras of the dressing room of a sauna were broken into. Imagine if someone can access your baby monitor with a camera or your security camera in your living room or bedroom...

So what can you do to secure your home automation system? If you choose an off-the-shelf system: not much. You fully rely on the manufacturer's ability to create a secure system and the goodwill to keep supplying patches that solve security issues that have been discovered. And the home automation and IoT industries have clearly shown they are not up to the task. This is one of the reasons why I prefer open source software. Not because it is always secure, but because the transparency of the open source development process forces developers to create more secure software.

There are many competing standards and communication protocols for home automation. Unfortunately, many off-the-shelf home automation gateways support only a small subset of these protocols or even use a proprietary protocol that locks you into using devices of the same manufacturer. That severely limits your choice of products.

So how can you do this? Many of the wireless communication protocols for home automation need a dedicated transceiver because they work on a specific radio frequency. That's where the Raspberry Pi shines: you can start with a basic Raspberry Pi setup supporting only IoT devices that are communicating over Wi-Fi and Bluetooth, add an RTL-SDR USB dongle to read the measurements of your 433.92 MHz weather sensors, later add a Z-Wave HAT on the board when you start adding Z-Wave sensors to your house and then add a Zigbee USB transceiver when you want to control some Zigbee lights.

Modularity is also important for software. There's a lot of user-friendly software to make your Raspberry Pi a home automation gateway. So you just install something like Home Assistant, openHAB or Domoticz on your Raspberry Pi and that's it: you have a gateway that supports tons of devices. Some of these systems are very modular and extensible, others aren't. Many of them support MQTT (Message Queuing Telemetry Transport), a common language to exchange messages.

MQTT has become the standard for interoperability between various home automation devices. For instance, if your home automation gateway of choice doesn't support Zigbee but it does support MQTT, then you only have to run the Zigbee2mqtt software, which translates the Zigbee protocol to MQTT messages. Your gateway can then talk to your Zigbee devices using MQTT.

Modularity also means that you don't have to have one gateway. You can perfectly have your main gateway in your basement, but install a second gateway with your 433.92 MHz receiver for your environmental sensors in your living room because that gives you better coverage to receive data from these wireless sensors. If you're using MQTT, that's very simple to implement: you just relay the sensor readings that your gateway in the living room receives to your MQTT broker, after which all the other components of your home automation setup can access the readings in the MQTT format.

In short: a good modular home automation system means that you can mix and match the devices that you like, irrespective of their protocol, and you can use the software and hardware components of your choice, in various locations in your house.

If you buy an off-the-shelf home automation gateway, you generally don't get access to its source code, so you cannot peek into it to see what it does or to assess its quality. You just have to believe the manufacturer on his word. Is that enough for you if it's about software that will get to know you intimately because it processes sensor readings and even camera images about you in your home? Not for me, so open source software is a hard requirement for my home automation setup.

But what when you're not a programmer and you wouldn't even understand the source code of your home automation system if you had access to it? Even then the use of open source software has a lot of advantages. It's not because you don't have the programming experience that others can't help. Most open source projects have a decentralized software development model that encourages open collaboration.

The power of open source

In the process of writing my book Control Your Home with Raspberry Pi, I participated in various communities of the programs I covered. I opened issues to report bugs, fixed some bugs, added support for new devices, contributed documentation, and helped people build their software for Raspberry Pi. This was all only possible because they are open source projects.

So if you find a bug in the software or see something wrong in its source code but don't have the programming experience needed to fix it, just report the bug on the issue tracker of the project, and hopefully, someone else in the project's community will step in and fix it. It all depends on the health of the project's community. But a good open source project has a vibrant community of developers and users who collaborate to continuously improve the software.

And open source doesn't just mean getting access to the source code, it's much more than that. For instance, when you know a specific software project is open source, you know that it doesn't arbitrarily restrict what you can do with it. The Open Source Definition even explicitly lists that the license of open source software must not discriminate against any person or group of persons, nor restrict anyone from making use of the program in a specific field of endeavour.

The decentralization and transparency of the open source development model gives power back to the users, where it belongs. For home automation that's even more important: I don't want a company having control over my house.

During the last ten years, there has been a worrying development in the computer industry: we all depend more and more on (centralized) cloud systems. Unfortunately, the home automation industry didn't escape this fate. Many popular home automation and IoT systems depend on a cloud server. Some examples:

This isn't without its problems. In the last couple of years some of these cloud services for home automation stopped working for their users: 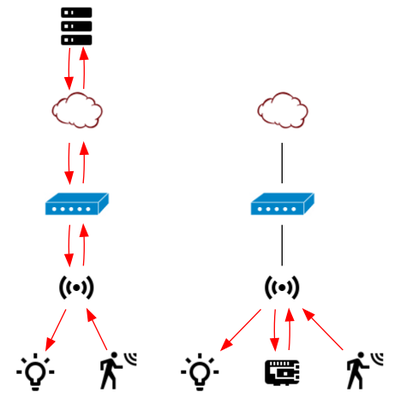 But fundamentally, the problem lies even deeper. It just makes no sense to use cloud services to automate your home. Home automation comes down to: you want one device to be able to respond to another device in your home. For instance: the motion sensor in your bathroom detects motion at night, and this turns the bathroom light on for five minutes. If you use IFTTT to link both devices, the motion sensor has to send a message to the internet, IFTTT relays the message to your bathroom light (for instance a Philips Hue light), and the bathroom light turns on.

But there's no need for an internet service like IFTTT between these devices because both devices are in your home, so it makes much more sense to link them locally, using a server at home. This could be a Raspberry Pi running home automation software that doesn't need a cloud server to function, but does all its processing on-device (or on the edge, as it's called now). You can perfectly do this with Node-RED or Home Assistant. Then there's no way a company can render your home automation system useless by shutting down their service, or your bathroom light doesn't turn on at night because your internet connection or IFTTT's servers are down. You're fully in control of your home automation system.

There's another risk: using cloud services for your home automation system invades your privacy. Look at some of the privacy issues with the services I talked about above:

After reading all this, do you still find it acceptable to use cloud services for your home automation?

How to do this?

This is an abridged version of the introduction of my book Control Your Home with Raspberry Pi. You can read the full introduction for free in the Elektor store, where you can also find the table of contents. In this book you will learn how to implement the four pillars of a good home automation system, by installing and configuring your Raspberry Pi as a highly flexible home automation gateway for protocols of your choice, and link various services with MQTT to make it your own system, including fully offline voice commands in your own language, and all secured with TLS.